Subscribe to our newsletter to stay updated about the global markets.

Select the ERShares Fund
You Would Like to Trade 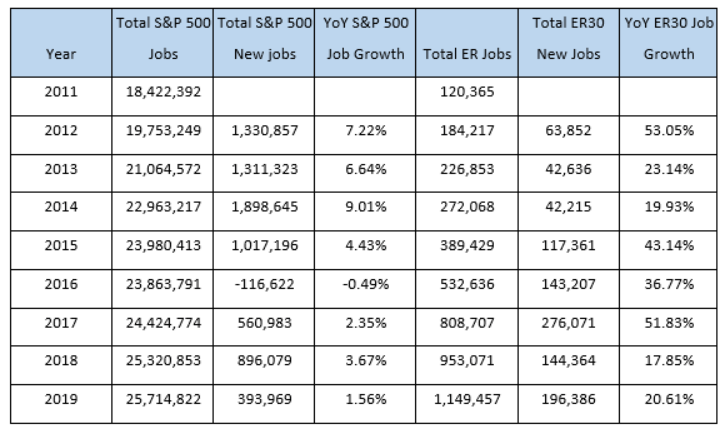 Table 1 shows the total jobs each year from 2011-2019, the number of new jobs created these years, and the year-over-year (YoY) job growth percentage in both the S&P 500 and ER30. Comparing the job growth data of the S&P 500 and ER30, it is surprising to see how many more jobs are being created by entrepreneurial companies over the years. It is important to note that the job data excludes major acquisitions. This means that entrepreneurial companies grow organically and not through mergers and acquisitions. Specifically, from 2011 to 2019, the companies included in the ER30 grew in jobs by around 1000%, while the S&P by a little less than 50%. This result illustrates how fast the entrepreneurial companies create organic job growth.

Figure 1 visualizes the job growth of the ER30 companies, comparing them to the total job growth of the S&P 500 and the whole U.S. (the table with the information found on the reference page). We observe that on a year over year basis, entrepreneurial companies have been the dominant leaders in terms of job growth, and the trend doesn’t seem to be slowing down.

Which Companies Created the Most Jobs?

Amazon.com employs over 1,298,000 people as per their fourth quarter’s earnings report. This number dwarfs any other in the list. It is also important to note that this number excludes contractors and temporary personnel. Moreover, with year-over-year growth of 63 %, it has created, by far, the most jobs out of any other S&P 500 company. Part of Amazon’s explosive job growth in 2020 can be attributed to the Covid-19 pandemic, which accelerated e-commerce in a big way. From Amazon Web Services to Amazon Prime streaming services, several revenue streams benefited from the pandemic, lifting Amazon’s worth to almost 1.65 trillion U.S. dollars. It is not an exaggeration to state that Amazon’s success is vastly owed to Bezos’ entrepreneurial mindset and the entrepreneurial culture he has created in Amazon, allowing Amazon to disrupt every industry it has entered.

Another example of entrepreneurial success is Alphabet Inc., Google’s parent company, which ranks second in job creation in the past decade. Currently, Alphabet employs almost 140,000 as per their latest press release (2021 first-quarter report). Google created more than 16,000 jobs in just the first quarter of 2021, with most of those employees working on Google Search and Google Cloud.

In addition to being one of the most prominent employers, Google boasts the highest average salary in the technology sector.

Which Industry Created the Most Jobs?

Among all industries, the service-providing industry has seen the most growth in recent years. Especially, services that have to do with data processing, information technology operations, and related consulting have surged even during the pandemic. The new work-from-home culture entirely benefits from online systems technology.  In the Information and Technology sector, e-commerce and Fintech are among the fastest growing industries.

In addition to that, the U.S. Bureau of Labor Statistics states that healthcare and social assistance is the fastest-growing major sector in the economy, which includes five out of the 20 fastest growing industries for the next decade. Specifically, the Bureau of Labor Statistics projects that employment in healthcare occupations will grow 15 percent from 2019 to 2029. The rate of growth is much greater than the average for all occupations and represents about 2.4 million new jobs created.

Compared to the rest of the sectors, the outperformance can be attributed to the aging population due to longer life expectancy and the constant increase in patient numbers with chronic conditions.

Which industries lost the most jobs?

Growth within industries has often fluctuated depending on the popularity or trends.

Formerly successful industries are way past their hay days. The manufacturing industry experienced the greatest job decline before the COVID-19 pandemic.

Furthermore, looking beyond the pandemic, even though manufacturing itself might not be declining, machinery and automation is reducing jobs on a big scale. Another industry that has undergone an interesting transformation is the information industry. A distinction can be made now between digital and print information.

The following table shows that newspaper, periodical, book, directory publishers, cable and other subscription details, and wired telecommunications carriers, are the most in decline.

Today, it is easier to find news on social media or company websites, as most news is published on digital platforms.  The cable industry has also suffered due to services such as Apple TV, Netflix, and Hulu. 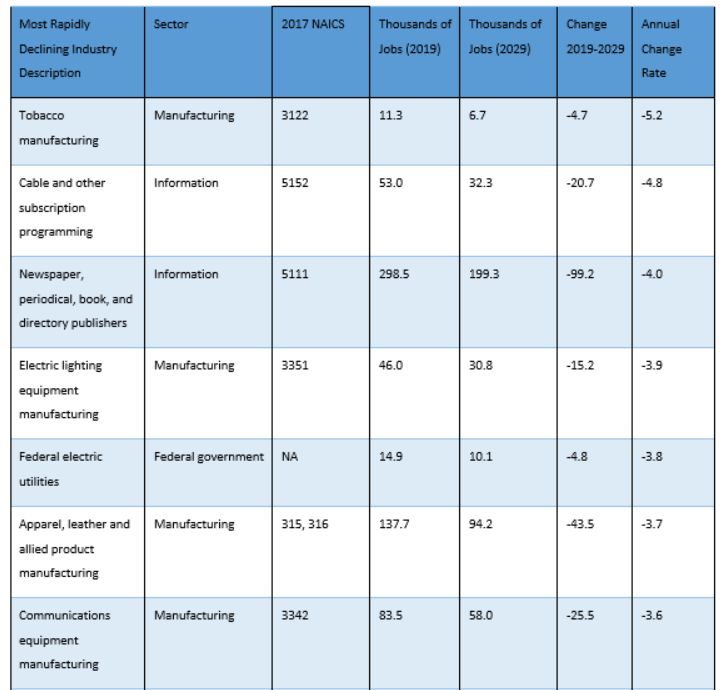 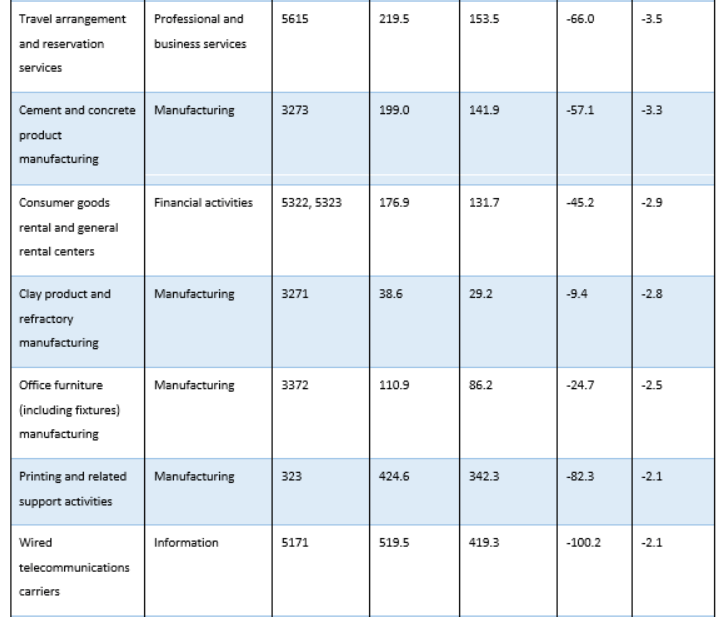 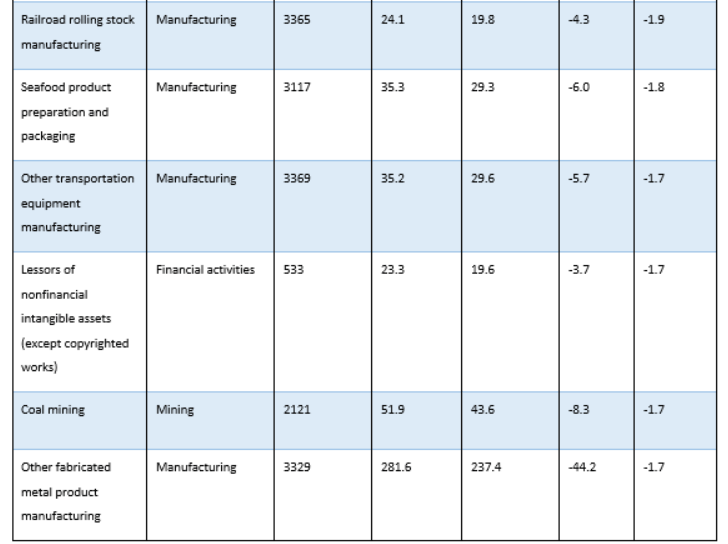 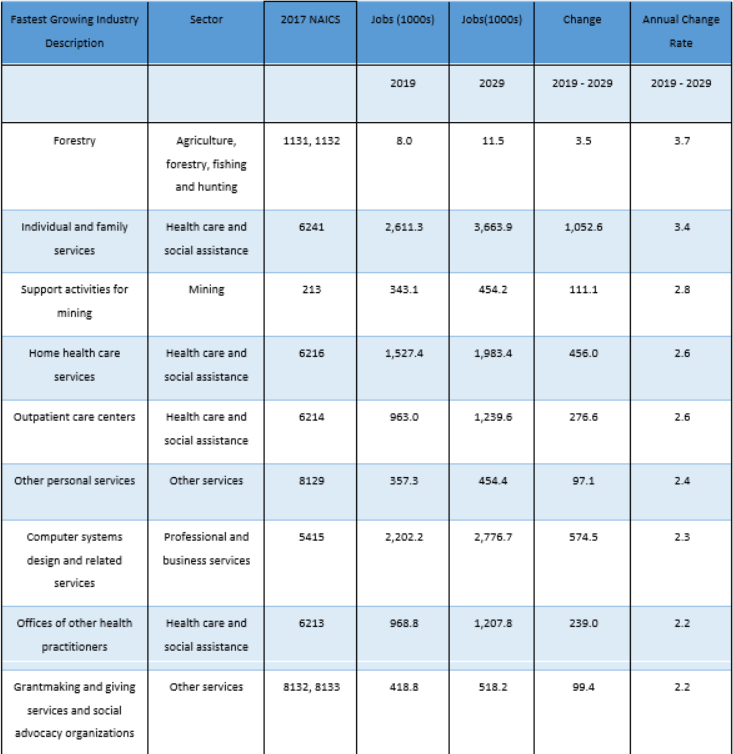 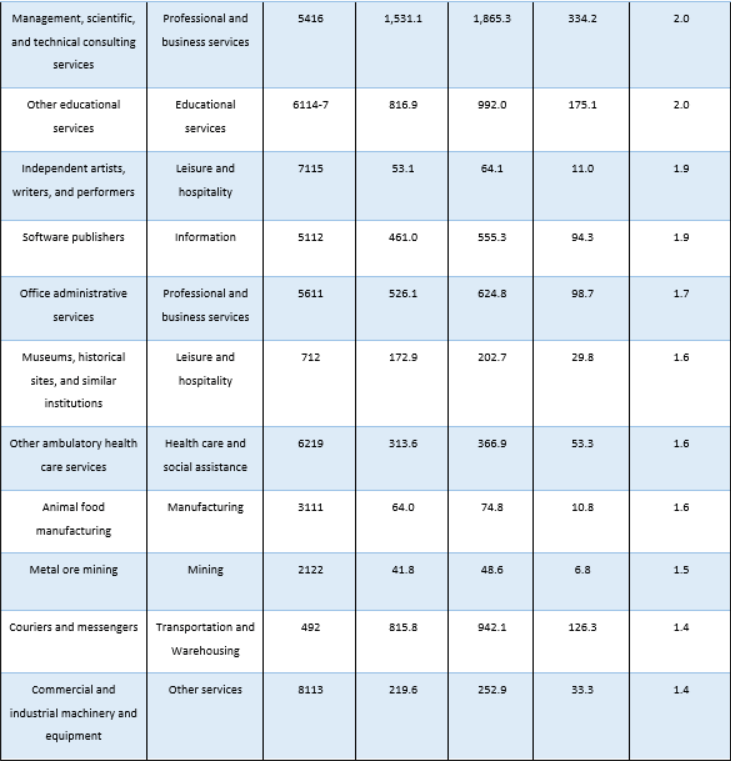 Sectors such as retail, hospitality, and leisure have been struggling, while technology companies have prospered. Some of the industries seem to be coming back to the pre-pandemic levels of operation; however, it is very plausible that the pandemic has affected specific industries irreversibly.

In light of this report, the success of entrepreneurial companies is also evident in the extraordinary ability of these companies to provide employment and growth in the economy.

How much of the job growth is created by entrepreneurial companies?

In Table 5, we can observe a widening gap over the years between the job growth achieved by entrepreneurial companies and the rest of the S&P 500.

In figure 2, we notice that over this past decade, the total new jobs created in ER30 increasingly influenced the total increase of jobs in the S&P 500. Specifically, in 2019, companies in both ER30 and S&P 500 are credited for a little less than half of the new jobs created in the S&P, which is impressive. This finding is also evident in table 6 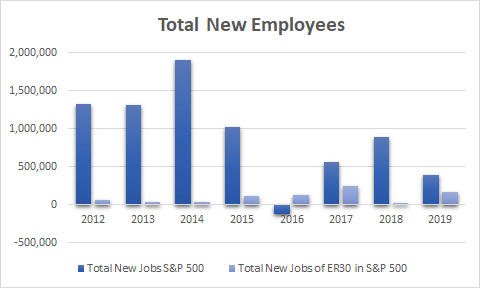 Looking for New Factor-Based Strategies? Look No Further than ‘ENTR’

Small Caps Still Beckon. And They Don’t Have to Be Risky

We are continuously working on increasing the availability of ERShares products on all platforms. If you do not see the funds or platforms you are interested in on this list, please reach out through the Contact Us page and we will make it a priority to have the funds you are interested in on the platform you want to invest on. Note: The ERShares ETFs are listed on the New York Stock Exchange (NYSE Arca). Thus, all platforms that can access NYSE listed stocks/products can access the ERShares ETFs.